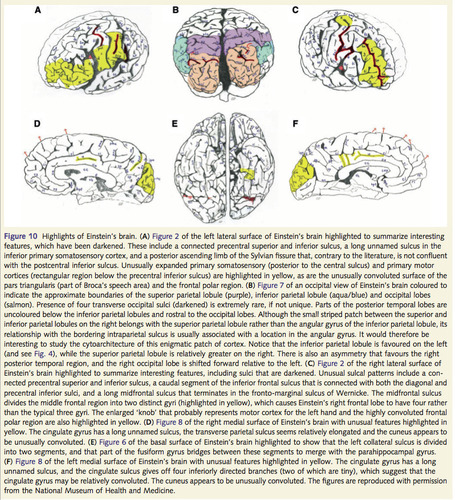 Scientists have been studying Albert Einstein’s dead brain for clues as to his genius. Einstein’s brain is of unexceptional size and its combination of a relatively wide and forward-projecting right frontal lobe with a relatively wide and posteriorly protruding left occipital lobe is the most prevalent pattern seen in right-handed adult males. Scientests have identified the sulci that delimit expansions of cortex (gyri or convolutions) on the external surfaces of all of the lobes of the brain and on the medial surfaces of both hemispheres. The morphology in some parts of Einstein’s cerebral cortex is highly unusual compared with control human brains for which sulcal patterns have been thoroughly described. To the extent possible, the blocks of brain from particularly interesting areas are identified on the ‘roadmap’ that was prepared when Einstein’s brain was sectioned, as a guide for researchers who may wish to explore the histological correlates of Einstein’s gross cortical morphology.
Contrary to earlier reports, newly available photographs reveal that Einstein’s brain is not spherical in shape. The surface area of Einstein’s inferior parietal lobule is larger on the left than the right side, whereas that of his superior parietal lobule appears markedly larger in the right hemisphere. The photographs also suggest that the primary somatosensory and motor cortices representing the face and tongue are differentially expanded in the left hemisphere, that the posterior ascending limb of the Sylvian fissure is separate from (rather than confluent with) the postcentral inferior sulcus, and that parietal opercula are present. Nevertheless, these findings are concordant with the earlier suggestion that unusual morphology in Einstein’s parietal lobes may have provided neurological substrates for his visuospatial and mathematical abilities.
These results also suggest that Einstein had relatively expanded prefrontal cortices, which may have provided underpinnings for some of his extraordinary cognitive abilities, including his product- ive use of thought experiments. From an evolutionary perspective, the specific parts of Einstein’s prefrontal cortex that appear to be differentially expanded are of interest because recent findings indicate that these same areas increased differentially in size and became neurologically reorganized at microanatomical levels during hominin evolution in association with the emergence of higher cog- nitive abilities. It would be interesting therefore to investigate the histological correlates of these (as well as parietal) regions of Einstein’s brain from the newly available slides. Future research on comparative primate neuroanatomy, paleoneurology and functional neuroanatomy will hopefully provide insight about some of the unusually convoluted parts of Einstein’s brain.