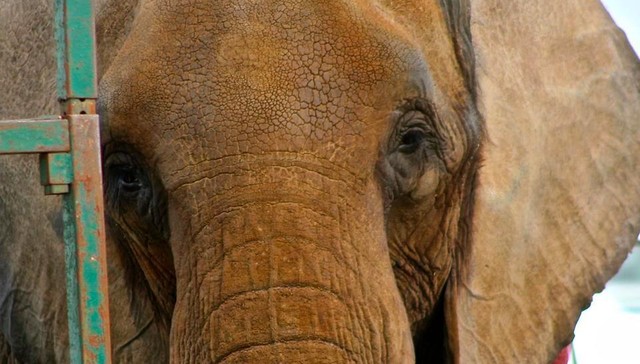 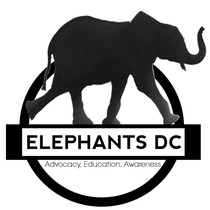 This post was created by a member of the Dodo Community, where anyone can post fascinating stories, photos, videos and more.

Somewhere in Florida, in the brutal summer heat and humidity, a lonely African elephant is standing, cramped and miserable, in a trailer much too small for her. Whenever she is led out of her confinement, all she has to look forward to is forced labor, and more pain.

Her name is Nosey — and she’s considered to be the most miserable and mistreated elephant in America. “Nosey” is the cruel name her owner Tommy Liebel gave her when he purchased her in 1988. Back then, she was a young elephant recently forced to wean from her mother’s milk after being stolen from the wild in Zimbabwe as an infant.

Unfortunately, Nosey is not the only elephant suffering in captivity. Across the nation, roadside traveling circuses and disreputable “zoos” are holding their performing elephants hostage. For the sake of a few profits, many elephants in America are still routinely beaten and held captive in inhumane conditions.

But of these poor elephants, perhaps no other better demonstrates the cruelty of the animal entertainment industry than sweet Nosey, the traveling circus elephant. For more than 30 years, she’s experienced all the trauma that captive elephants face. Once you meet Nosey, you’ll never think an elephant should be coerced into performing again.

Nosey’s story is one of the saddest you’ll ever hear. 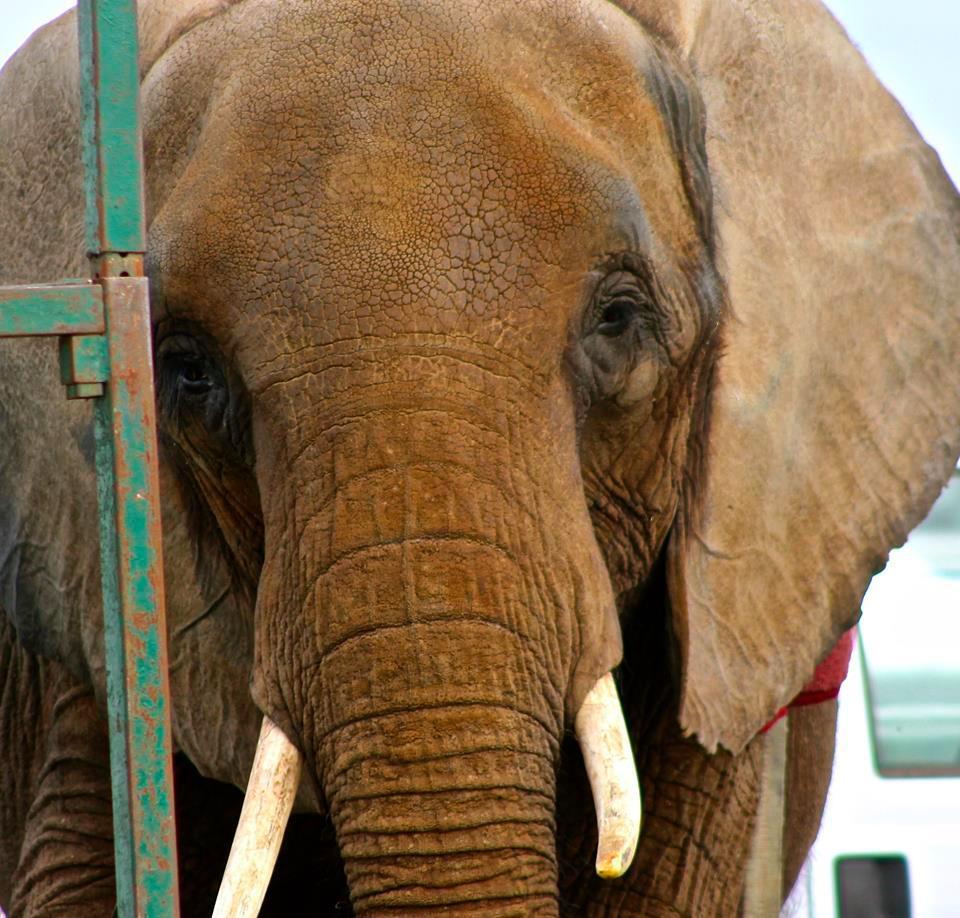 Photo: Action for Nosey NowNosey the Elephant’s story is long, winding and almost unbelievably dismal. Born in 1982 in the lush African wilderness of Zimbabwe, Nosey lived a short two years with her mother and extended elephant family before being shipped halfway across the world to America. (Her mother and family were likely slaughtered at the same time.)

But rather than being outraged by Nosey’s capture from the wild at such a fragile age, Nosey’s capture — and that of 62 other baby elephants at the time — was celebrated as a “rescue effort” to save the baby elephants from a government-issued culling. Nosey, along with most of the other elephants, was sold to animal handlers shortly after arriving in the US.

In 1988, Nosey’s sad fate was sealed when she was sold once again and transferred into the hands of her current owner, Tommy Liebel of the Liebel Family Circus — a circus that already had a terrible track record of elephant abuse, with at least two prior documented elephant deaths.

In the nearly 30 years since then, Nosey has lived a life entirely alone and entirely at the mercy of her owner. Nosey has been forced to perform across the country in brutal conditions, spending the majority of her days in a hot, cramped trailer much too small for an elephant her size. Thick callouses and scars around her legs demonstrate decades of excessive use of chains.

Countless accounts detail her appalling “training” regime: Nosey has been starved, beaten with a shovel, electrocuted, and stabbed with sharp metal poles on a regular basis. Liebel, Nosey’s owner, has been cited more than 200 times for violating the Animal Welfare Act. However, Liebel has not yet been successfully prosecuted by the US Department of Agriculture for the violations.

Nosey is still forced to carry humans on her back for rides, despite the fact that her years of mistreatment has resulted in painful arthritis. The poor elephant also suffers from numerous other untreated health conditions, including a nasty skin disease and chronic gastrointestinal distress.

As Nosey’s condition deteriorates, the risk grows that she could act unpredictably, lashing out in pain, fear and abuse-related madness, and putting humans in danger. Or, she’ll be worked literally to death, euthanized when she can no longer stand from the pain.

Without a doubt, it is high time that Nosey be freed from her abusive captors and sent to live in a true elephant sanctuary for the rest of her life. It’s the least she deserves after so many years of misery.

Luckily, Nosey has friends. Thousands of dedicated advocates and animal welfare organizations have been fighting tirelessly for years to draw attention to Nosey’s plight and get her the care she needs and the freedom she deserves.

“Nosey the elephant has been alone and abused for human entertainment for over 30 years,” says Barbara Lovett of Save Nosey Now! “We must do everything in our power to free her to a true sanctuary and end the struggle she endures daily.”

The Elephant Sanctuary in Tennessee has already agreed to accept Nosey. But her owner refuses to relinquish her, and the US government has failed to take appropriate action to remove Nosey from her deplorable conditions.

So Nosey’s suffering continues, unabated. She is sitting right now in chains, in pain and indescribable loneliness, while you read this sentence.

Thousands of elephants remain captive in the US and abroad. 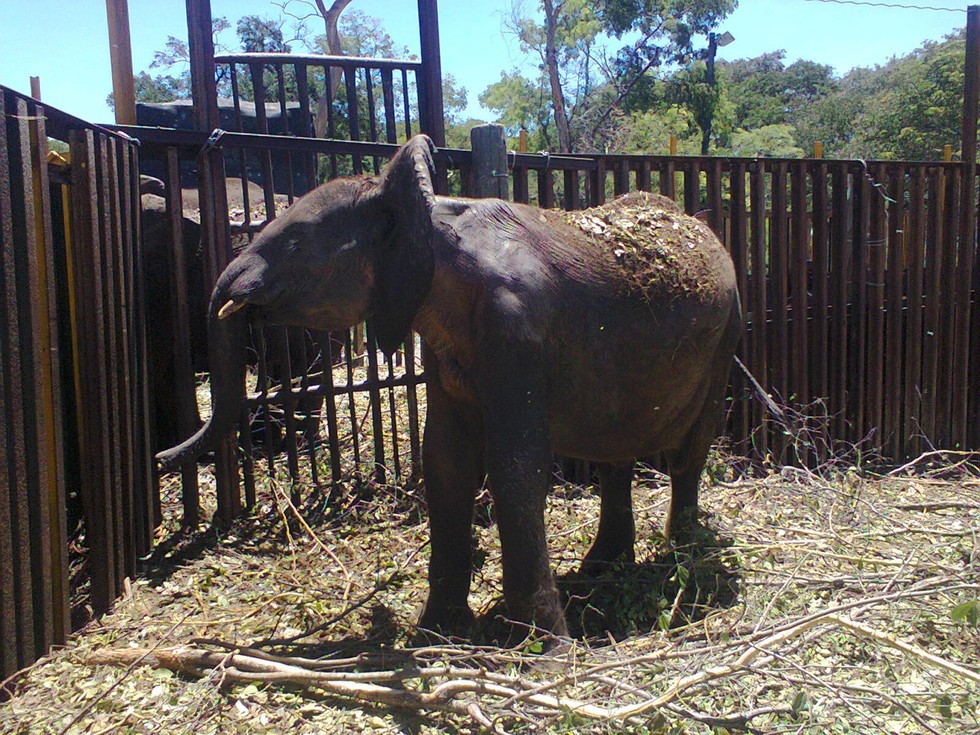 One of many kidnapped elephant calves held in captivity by the Zimbabwe government this year. Photo courtesy: Elephants DCAs terrible as Nosey’s story is, she’s unfortunately only one of many elephants to suffer like this in the United States. There are more than 400 other elephants held captive in our country alone — and as many as 20,000 elephants in captivity worldwide.

Elephant experts agree that there is no ethical way to keep elephants in captivity, given their complex social, health, and geographical needs. Elephants don’t just like the company of other elephants — they need them. They also need vast amounts of space to roam. Whether forced to perform like Nosey or not, all captive elephants suffer.

Unfortunately, baby elephants like Nosey are still being kidnapped from the wild to this very day. Animal advocates and elephant conservation experts have recently cried out in horror the Government of Zimbabwe’s decision to kidnap more than 80 baby elephants from the wild and export them into Chinese captivity. Torn from their mothers, the Zimbabwe elephant calves face a life of confinement, suffering and misery.

In a positive development, Ringling Bros. made history earlier this year with its announcement to phase out elephant acts from its circuses by 2018. The decision drew powerful attention to the suffering and abuse that elephants face — as intelligent, emotional and social beings — when they’re forced to perform for our entertainment.

However, Ringling Bros.’ elephants still have several years of suffering ahead of them, and it’s not clear whether they will get the true retirement they deserve once they stop performing. Plus, many other circuses in the United States have yet to follow Ringling Bros.’ lead.

Until they do, many elephants like Nosey and others will remain sad, lonely prisoners of our entertainment industry.

Take a stand for Nosey on June 26.

Want to help Nosey, and other elephants like her? Join the movement to free her!

On Friday, June 26, a group of concerned citizens will rally in Washington, DC to demand that Nosey gets the freedom and care she’s long deserved. The protest will take place in front of the US Department of Agriculture building starting at 11 a.m. For the event address and other information, check out the Facebook event page.

If you’re in the area, please come by to take a stand for Nosey, and all the other abused elephants like her. And be sure to check out the Elephants DC advocacy meeting happening at 4 p.m. in Washington on Saturday, June 27.

Can’t make it to Washington, DC? There are several others ways you can help Nosey today — from making a critical phone call to signing petitions to getting active on social media.

Together at home and around the world, we can save elephants from extinction and end the pain of captive elephants suffering for greed. Let’s educate. Let’s protect. Let’s save Nosey the elephant.

Let’s be her voice. Collectively, we have the power to give Nosey a luxury retirement. Let us all work together to help Nosey find sanctuary today!

3 thoughts on “Somewhere in Florida, in the brutal summer heat and humidity, a lonely African elephantm, Nosy, is standing, cramped and miserable, in a trailer much too small for her.”