KFC’s largest chicken supplier in Springdale, Arkansas was reportedly raided by the FDA on Monday due to suspicions of mass mutations taking place in their chickens. It has been no secret that KFC plumps up their chickens with the use of steroids and hormones in order to create a bigger yield to supply their restaurants around the world. However, the accusations of mutated chickens has been streaming across the Internet for years commonly referred to as a “conspiracy theory.” 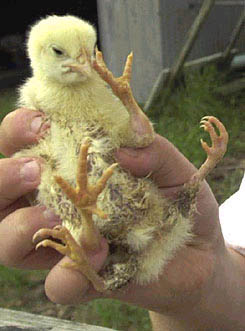 Now, with the FDA raid, those accusations are no longer “theories,” but proven fact. In the photos just released, you can see just how “mutated” these chickens have become due to their scientific experiments. Experiments that they were hoping would yield them twice the chicken legs for half the price. Getting four legs per chicken was estimated to bring them an additional…

Source: Dead comet with skull face to hurtle by Earth on Halloween

How could this not make you smile https://www.youtube.com/embed/sGF6bOi1NfA?autoplay=1&autohide=1&showinfo=0&rel=0

Source: No survivors: Heartbreak as 224 people die after Russian plane ‘splits in two’ in Egypt

ONE of Nature’s most powerful forces and mankind’s greatest discovery are conspiring to cause one of the worst environmental disasters in living memory.

Almost 500,000 men, women and children are choking in the vast smoke clouds thrown up into the skies by Indonesia’s wildfire epidemic.NASA satellites have pinpointed 358 fire hotspots in the last week alone as the flames rage through fields, scrub and into the precious rainforests.

By the day the death toll of fire-fighters rises.

At least 19 have been killed by blazes that move faster than a man can run. Indonesia’s tragedy is the horrifying consequence of slash-and-burn farming and the impacts of an El Niño weather system that has turned the land into a tinderbox.

Together, they have created unstoppable fire storm that has coated thousands of square miles in a deadly shroud of smoke that is impacting on millions of lives.Warships have been put on alert to evacuate children from the worst areas where the toxic smoke hovers and schools and offices are being shutdown.

Flights have been cancelled and it is predicted that Indonesia’s faltering economy could suffer £32 billion losses, around four per cent of its GDP.

For Indonesia, an emerging Far East powerhouse, the fires are also creating diplomatic friction with neighbouring Singapore and Malaysia.

On a global scale, the pollution is elevating the country into one of the world is highest producers of climate change carbon emissions.Experts have calculated the fires this year have pumped 1.62 billion tonnes CO2 into the atmosphere.

Out of 38 days of the last eight weeks, the fires have released more greenhouse gas pollution than the US economy.

For Indonesia’s security chief Luhut Panjaitan, tasked by President Joko Widodo to handle the government’s response to the disaster, shortcomings in weather predictions meant the country was not expecting a firestorm worse than the 1997 disaster.

Those fires were regarded as the largest forest conflagrations for more than two centuries, but as this year’s infernos continue to rage, Panjaitan is blaming the country’s weathermen for getting it wrong.

“I must admit there was a mistake in the BMKG (Indonesia’s state weather agency) forecast that didn’t predict El Niño this year would be worse than 1997. Our forecast was wrong,” he said.Across the Java Sea from fire-ravaged Borneo, farmers pray for deliverance from the drought.

Dressed as traditional warriors, men take turn to battle with wooden staves as village women chant: “All farmers let us pray that rain comes and washes our sorrow away.”

The El Niño, a complex Pacific climatic phenomenon, has left Indonesia needing the rains to feed its 250 million population as well as bolstering the economy to stop more of its people slipping into poverty.

For President Widodo, the first of its leaders from humble roots, poverty reduction has been a major, now bringing the devastating fires to a halt is his consuming priority.

He cut short an official visit to the USA and is now considering whether to declare a national emergency.A review of laws that allows farmers to burn up to five acres (two hectares) of land is also underway.

Farmers can slash and burn land to grow crops but both environmentalists and plantation owners say this is the key cause to the annual cycles of fires, made all the worse by this autumn’s El Niño.“We support our government’s initiative to revise the provisional laws that allow small-holder farmers to clear up to two hectares of forested land by burning,” said Aida Greenbury, managing director of sustainability at Asia Pulp and Paper (APP).

“But a multi-stakeholder initiative to support the local farmer and community must be initiated in parallel. The key here is to assist the farmers and the community in developing their land responsibly without burning.”

But Greenpeace has thrown down a challenge to the plantation industry. It says its analysis shows that deforestation and peatland drainage by pulp and palm oil companies is the root cause of the haze crisis.“There can be no question that the root cause of the fires crisis is decades of forest and peatland destruction by pulp and palm oil companies.. These fires and the toxic haze will return year after year until plantation companies turn off their bulldozers.

As the fires rage, the innocents suffer. Children choke.

Forest fires in Borneo have endangered the apes even further

The endangered apes are being cremated in the relentless forest fires running out of control across Borneo.

How many have died is impossible to calculate amid the billowing smoke and confusion, but dedicated teams from International Animal Rescue are putting their lives on the line to bring the terrified creatures to safety.

One of their rescues saw a mother orangutan and her infant brought to safety after she sought sanctuary from the choking smoke and searing flames by hiding in a rubber tree plantation.

Both had suffered bad burns on their feet from crossing a smouldering field to find safety before they were anaesthetised and taken out of harm’s way. So far, IAR’s teams have saved 14 of the gentle creatures since the fires first began to rampage through some of the last great wilderness in existence. Now the race is on to reach five more wild orangutans at serious risk in different locations as the flames destroy precious forests by the day. The way the unstoppable conflagration has taken grip in the unique peat swamp forests is putting 20,000 Bornean orangutans – a third of their entire population – in danger amid the patchwork of national parks and reserves where they hang on to existence.
IAR warns there is no longer any safe refuge for orangutans as fires break out in two protetected peat swamp forests areas with the largest populations in Sungai Putri and Pematang Gadung. In Pematang Gadung, where IAR runs a conservation project, the community patrol team is putting out fires using portable pumps and water sprayers, but is in urgent need for more manpower and Equipment.

“We have put a great deal of effort into preserving orangutan habitats and believed the orangutans in protected areas would be safe, but now we find they are still in danger,” Karmele Llano Sanchez, programme director for IAR Indonesia, warned today. “Orangutans and other animals are being burnt alive, left without food and starving to death, or being pushed out of their habitat into plantations and villages where they are at risk of being killed.

Around 20,000 orangutans are at risk of the blaze

“We don’t know how many orangutans we have lost in this crisis but we know that this is going to be devastating for orangutan populations in the wild and could mean that orangutans will soon be closer to extinction. “This is a global environmental crisis and it is already considered by experts as the worst man-made ecological disaster of the century which will affect the lives of people the world over. “I fear that the worst is yet to come for the orangutans. And if serious action isn’t taken soon to stop the fires, it will simply be too late for them.” In another rescue by the IAR, a mother and baby orangutan were discovered in a village where the locals were throwing things at them.

Around 500,000 people have suffered breathing problems from the fires

They had attempted to tie the mother up with a rope but the team were able to anaesthetise her with the baby still clinging to her arms. Both have been taken to a conservation area where they are adapting well. Indonesia’s forest fires are almost an annual event but this year they may exceed the damage of 1997/1998 when millions of acres of forest were destroyed. The human impact is also disastrous.

WARNING: GRAPHIC CONTENT HORRIFYING photographs have emerged showing the latest wild animal butchery after more than 60 elephants were killed in the They are the latest victims in a spate of terrifying killings, which are also believed to have been caused by Cyanide. …

Slumped and lifeless, the appalling photographs show some of at least 62 elephants slaughtered in Hwange National Park in Zimbabwe in a matter of days.

They are the latest victims in a spate of terrifying killings, which are also believed to have been caused by Cyanide. …