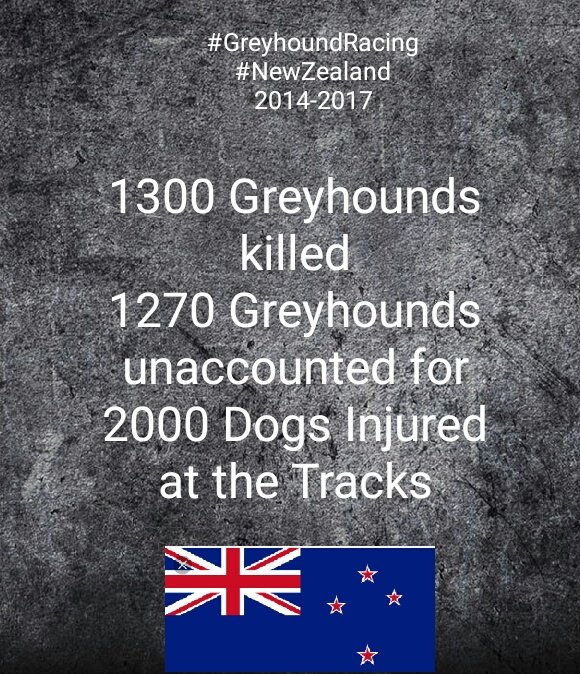 It shows that over the past three racing seasons, more than 2000 dogs were injured while racing, and 165 were put down due directly to racing.
Of more than 1000 racing dogs put down, two-thirds were euthanised soon after their last race.
Most dogs do not race more than 40 times.
Photo: RNZ
The report said it was difficult to extract reliable figures from the industry. In the three racing seasons from 2014 to 2017, at least 1300 dogs were euthanised and 1271 were unaccounted for – in other words, they could not be tracked or there was no information retrieved. A previous report in 2013 also highlighted concerns regarding the industry and animal welfare.
“There is nothing to show what has happened to the 1271 dogs who are unaccounted for.
“Unless the numbers of greyhounds bred and imported for racing are drastically reduced, it seems inevitable that euthanasia on a scale characterised as “unacceptable” in 2013 will continue.”
The Society for the Prevention of Cruelty to Animals said the organisation was concerned about significant animal welfare problems inherent in the greyhound racing industry such as indiscriminate breeding, physical overexertion, stress, injuries and illegal live baiting.
Using a live animal, or a carcass, as bait for training or racing is illegal. The report said there was evidence of the abhorrent practice in some Australian states and this had raised concerns it may be occurring in New Zealand.
“While there have been no confirmed instances of either livebaiting or deadbaiting in New Zealand in recent years, there is an investigation currently under way which may reveal evidence of relevant breaches of [the law].
“Due to these welfare issues, the SPCA has been working closely with the New Zealand Greyhound Association over the last year but is disappointed at the lack of any substantive progress being made to improve the quality of lives of greyhounds.
“The SPCA hopes that the report will be the catalyst to ensure real animal welfare progress is made whilst greyhound racing remains a legal activity in New Zealand.”
Racing Minister Winston Peters said while the industry has taken steps to improve greyhound welfare it still has a long way to go to clean up the sport. He said he met with the racing board this week and the industry was left in no doubt just what a dismal view the government has of the treatment of the dogs.
Greyhound Racing New Zealand said it accepted there were a number of concerns raised in the new report, but denied dogs were being ill treated.
The racing organisation’s chair Sean Hannan said every one of the 20 recommendations would be addressed. He said the biggest issue was a lack of data about what happened to dogs. https://www.radionz.co.nz/news/national/346633/greyhound-euthanasia-numbers-unacceptably-high

One thought on “Greyhounds are dying and being injured in unacceptably high numbers on New Zealand race tracks, a new report says.”