All animals feel pain. So why do only humans live in dread of suffering?

Terrance Klein February 24, 2017
americamagazine.com
in the view of jesuits 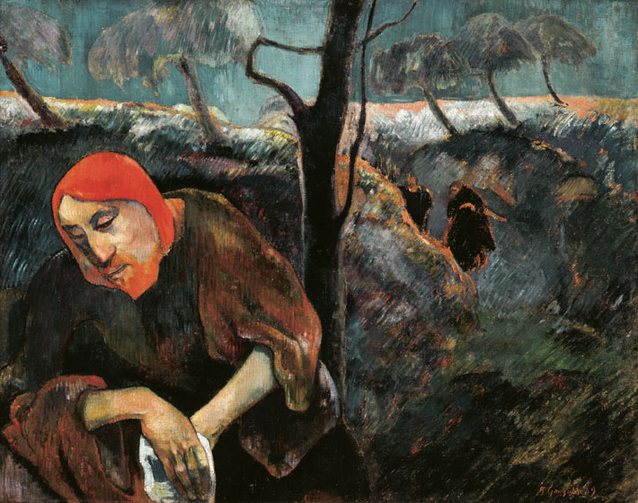 Paul Gauguin, Christ in the Garden of Olives, 1889

Catholicism carries a sense of measure, of balance and proportion. This is evident in the very existence of the church’s liturgical year. We do not land upon this or that mystery of our salvation, of the Lord’s life, on the whim and wit of the preacher. No, in the course of the calendar, we solemnly make our way from expectation to nativity, from mission and preaching to cross and resurrection, and then beyond, to the glory that awaits the final revelation.

Yet, because the liturgical year unfolds within the Eucharist, we know that we are never apart from the whole of Christ. The infant in the manger has come to suffer. The one of the cross is still the innocent child of the virgin. And every moment of Christ’s life is understood in the light of his resurrection and glorification.

When Cardinal Newman preached his noted sermon on the mental sufferings of Christ, he took some comfort knowing that, whatever the result of his efforts, that season had arrived in which “the religious usage of the Church requires it.” But today, that season has not arrived. Lent isn’t yet come.

Yet with a wisdom that outpaces planning committees, the church cycles her readings in themes, so that the first reading and the Gospel dialogue. Today, they both ask us to let go of something fundamental to human life as we know it: fear.

Zion said, “The Lord has forsaken me;
my Lord has forgotten me.”
Can a mother forget her infant,
be without tenderness for the child of her womb?Even should she forget,
I will never forget you (Is 49:14-15).

Humans feel pain, as all animals do. Like all animals, we seek to avoid it. But other creatures do not suffer the mental anguish that accompanies human life. Lacking a consciousness that can imagine (that which is not the case), they do not live in dread. They do not have to beat back the specters, which our creative minds, alone, can summon.

For example, animals do not know that they will someday die. We do, even when we refuse to acknowledge that truth. Many animals suffer pain in birthing, but only a precious few moments pass between the end of pain and a new, more pressing problem for a human mother: presentiment. Handed her newborn infant, she is given something else: care and concern. What will become of my child? What does the future hold? Please God, keep it safe; bring it securely to yourself someday.

Only we humans live in fear of losing our jobs, of seeing our relationships end, of losing our health and independence and, with it, our homes, of losing those whom we love. On the most bitterly cold of days, or deprived for long periods of water, animals do indeed ache, but they do not live with the anxiety that tomorrow will only be more of the same. All animals suffer. Only humans live in dread of suffering.

All animals suffer. Only humans live in dread of suffering.

Whatever efforts we expend to ignore it, human suffering is born of the knowledge that everything that is must give way to what is not. We know that youth will pass, that health will decline, that all, which we call our own, will fall from our hands; that we ourselves will die. Whatever was before me will continue after me, only without me. I do not possess the world; no, I am awash in it. Human presentiment leave us with only two options: faith or psychosis. Either we reach to a surety beyond ourselves or we expend every possible effort ignoring our fate.

Newman’s great insight was that our Lord suffered as any man would suffer, which is to say, that Jesus could, and did, dread his own death. How can this be, since Christ was God, and God cannot fear annihilation? Because, the night before he died, Christ willingly chose his death, chose to embrace sin on our behalf. And what is sin, Newman asks, but the absence, the annihilation of God?

When we sin, only a small portion of God’s good creation turns in upon itself, erodes itself. When Christ, who was God and man, embraced sin on our behalf, the utter fullness of goodness and being did something truly inconceivable. It embraced its own annihilation.

Newman probes the meaning of our Lord’s avowal in the garden, “My soul is sorrowful even unto death.”

There, then, in that most awful hour, knelt the Savior of the world, putting off the defenses of His divinity, dismissing His reluctant Angels, who in myriads were ready at His call, and opening His arms, baring His breast, sinless as He was, to the assault of His foe,—of a foe whose breath was a pestilence, and whose embrace was an agony.

In primordial innocence Christ had preached:

Do not worry about your life,
what you will eat or drink,
or about your body, what you will wear.
Is not life more than food and the body more than clothing?
Look at the birds in the sky;
they do not sow or reap, they gather nothing into barns,
yet your heavenly Father feeds them.
Are not you more important than they? (Mt 6:25-26).

Now, in the garden, Newman suggests that Christ opened his mind, as God and man, to the horror that is sin. Christ embraced the most alienated region of human life: our fear. He drank our dread to the dregs.

It is the long history of a world, and God alone can bear the load of it. Hopes blighted, vows broken, lights quenched, warnings scorned, opportunities lost; the innocent betrayed, the young hardened, the penitent relapsing, the just overcome, the aged failing; the sophistry of misbelief, the willfulness of passion, the obduracy of pride, the tyranny of habit, the canker of remorse, the wasting fever of care, the anguish of shame, the pining of disappointment, the sickness of despair; such cruel, such pitiable spectacles, such heartrending, revolting, detestable, maddening scenes; nay, the haggard faces, the convulsed lips, the flushed cheek, the dark brow of the willing slaves of evil, they are all before Him now; they are upon Him and in Him.

Fear is the first fruit of sin. Animals, who have never sinned, do not live in dread. We do. And that is why so much of our life, our God-given potential, is forever cut off from us. Because we cannot believe in the sheer goodness of God.

I Tell You: Do Not Worry!
Michael Simone

Sin is what separates our lives from those of Christ and his saints. Within us sin and dread swirl in such a vortex, it is impossible to identify which gave birth to the other. Yet this much we know. The courage Christ preached and the courage with which Christ suffered—even before his torturers arrived—that same courage can and must be ours, because simply to live is to push back against the dread of nothingness, which our faith tells us is…nothing at all.